Salt Lake City, UT — Sept. 2, 2021 – Utah’s federal courthouse in Salt Lake City was officially named the Orrin G. Hatch United States Courthouse as a tribute to Senator Hatch’s outsized influence in shaping and strengthening the judiciary. Senate Majority Leader Mitch McConnell (R-Kentucky) first introduced legislation to name the courthouse after Senator Hatch in December 2018. The bill ultimately passed both the House and the Senate with overwhelming bipartisan support and was signed into law on December 21, 2020. The Utah congressional delegation took part in a virtual naming ceremony today to honor the Senator.

“I felt immensely humbled when I heard about the naming of the federal courthouse last December. This news came as a complete surprise to me, and I understand that many of my friends, both here in Utah and across the country, went to great lengths to make it happen. As one of the longest-serving members in the history of the Senate Judiciary Committee, I made it my life’s legacy to defend the rule of law and the integrity of our courts,” said Hatch. “I hope the naming of the federal courthouse will inspire a new generation of jurists to do the same.” 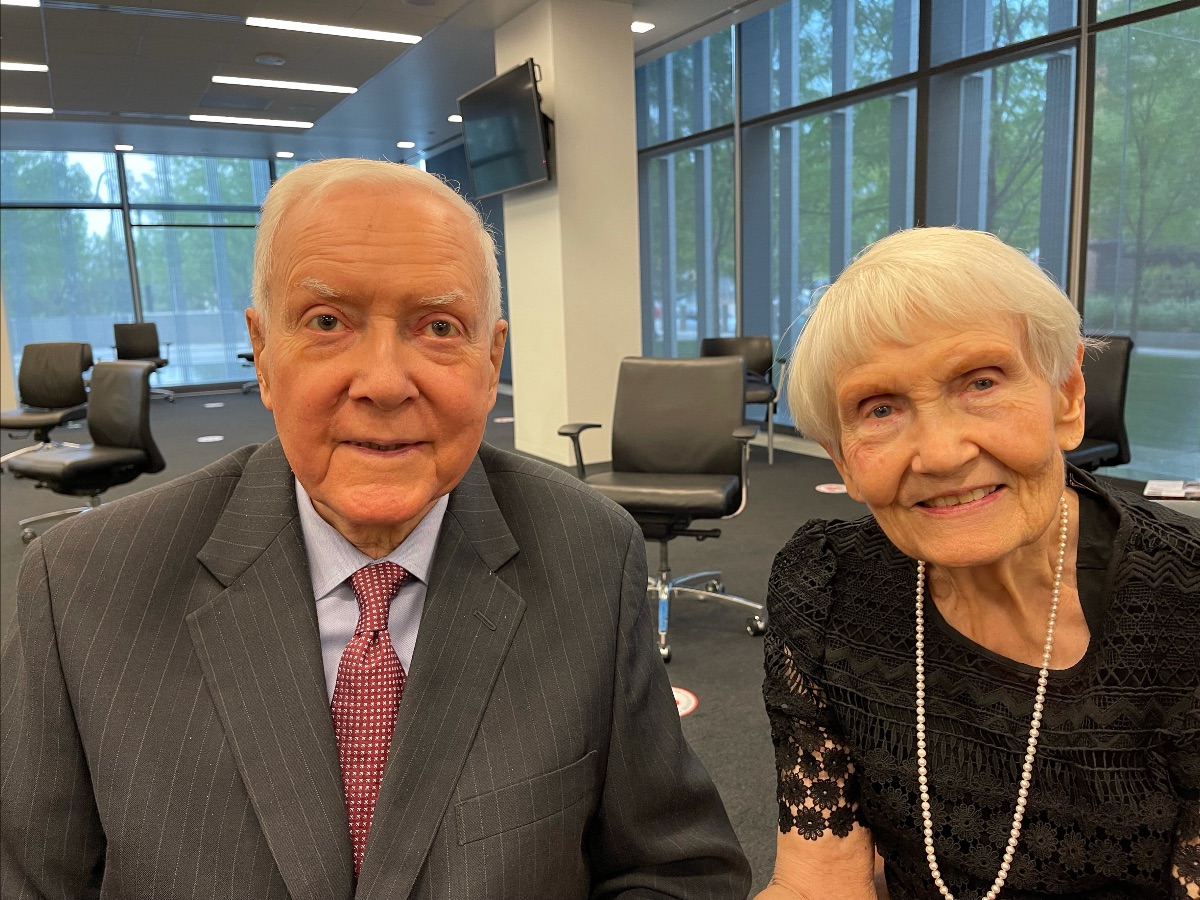 Senator Mike Lee (R-Utah):
“I can’t think of any other Utahn in the history of our state who had anywhere near the kind of impact on the federal judiciary as Senator Hatch … . He had a special commitment to the rule of law and fundamental fairness—and in judicial confirmation hearings, he always made sure that the Senate did its job without getting mired in the politics of the day. I’ve come to revere Senator Hatch as someone who reveres the law. [It is] only fitting to name this federal courthouse after him.”

Senator Mitt Romney (R-Utah):
“Senator Orrin Hatch dedicated his life to serving our country and our state. As one of the longest-serving chairmen of the Senate Judiciary Committee, he played a pivotal role in the confirmation of many current and retired Supreme Court justices. Senator Hatch’s positive impact on the state of Utah and the nation’s federal judiciary cannot be overstated, and it is only appropriate that Utah’s federal courthouse be named in his honor.”

Congressman Chris Stewart (R-Utah, 2):
“Senator Hatch served the people of Utah with great honor and dedication for 42 years in the US Senate. He and his wife, Elaine, made great sacrifices for our country, for which I am forever grateful. Senator Hatch had an unparalleled impact on the judiciary, and it’s perfectly appropriate that we name the new courthouse in Salt Lake City after my dear friend.”

Congressman John Curtis (R-Utah, 3):
“The name Orrin Hatch is practically synonymous with the federal judiciary. No other Utahn in the history of our state has had such a wide-ranging impact on the US court system. The courts and the Constitution are stronger today thanks to his many decades of public service. I hope that future lawyers and judges will be inspired by his example.”

Congressman Burgess Owens (R-Utah, 4):
“Our Constitution is in safe hands, thanks in large part to the hundreds of judges Senator Hatch worked to confirm over many decades of public service. It is my hope that these judges will approach constitutional matters with the same wisdom and sobriety Senator Hatch showed as one of the most experienced members of the Senate Judiciary Committee.”

Congressman Blake Moore (R-Utah, 1):
“Senator Hatch knew the federal judiciary like no one else, and he played a critical role in shaping it. The naming of the Orrin G. Hatch United States Courthouse cements his legacy as one of the most influential Senators ever to serve on the Senate Judiciary Committee. This building is a beautiful tribute to a public servant who dedicated his life to defending the rule of law.”

Former Congressman Ben McAdams:
“Senator Hatch’s accomplishments on behalf of Utah and our country are a remarkable reminder of the bipartisanship we need to return to … . The Senator cared deeply about the rule of law and the integrity of our courts. Putting his name on the federal courthouse is a well-deserved and hard-earned honor, marking his many contributions to the judiciary, to his state, and to the country.”

United States District Court Chief Judge Robert J. Shelby:
“For decades, Senator Hatch was a power player on the Senate Judiciary Committee, playing a critical role in shaping legislation and overseeing the judicial confirmation process. In fact, the majority of judges serving here today—myself included—were confirmed while Senator Hatch was in office. His knowledge of the law and the Constitution is unparalleled. We hold for him the deepest respect and admiration and are honored that this courthouse will now bear his name.”

Hatch Foundation Executive Director Matt Sandgren:
“The naming of the Orrin G. Hatch United States Courthouse is a powerful tribute to a man who dedicated his life to building and strengthening the federal judiciary. As his former Senate Judiciary Committee senior counsel, I was able to see firsthand his mastery of the law, his respect for the Constitution, and his ironclad commitment to upholding the integrity of our courts. Senator Hatch has left an indelible imprint on the judicial branch, mentoring a generation of lawyers and judges who have ably defended our most fundamental rights. This building will stand for many years to come as a lasting memorial to his public service. 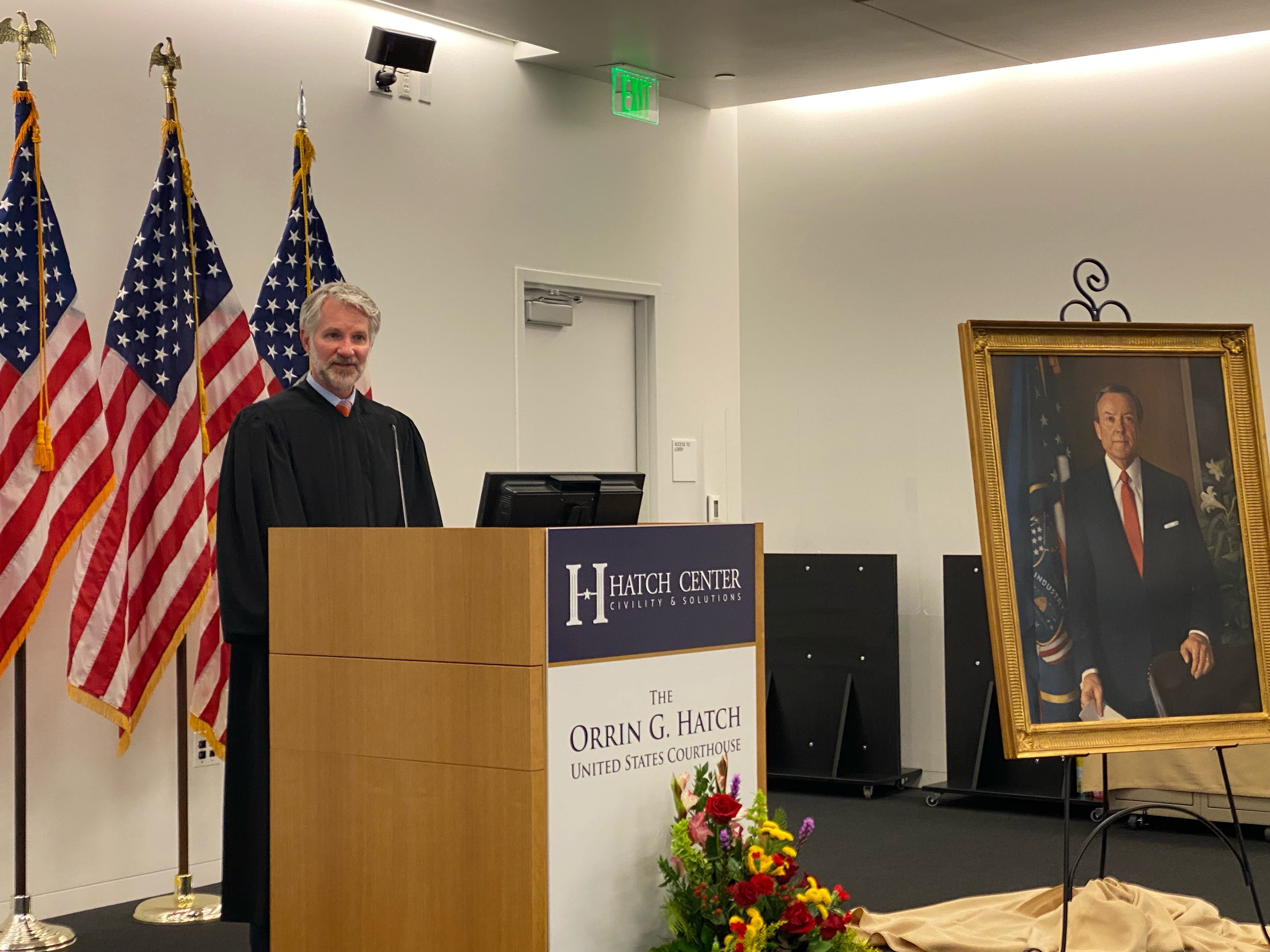 The Orrin G. Hatch United States Courthouse was one of the most ambitious federal construction projects ever undertaken in the state of Utah. Home to the United States District Court for the District of Utah, the building took twenty years to secure funding and property before groundbreaking took place in January 2011. It was completed and opened to the public in April 2014.

At ten stories tall and more than 400,000 square feet, the courthouse is remarkable not only for its size but also for its design. Thomas Phifer, a world-renowned architect based in New York, designed the building in the modernist style, with sharp angles, minimalist accents, and elegant lines. The building uses extensive amounts of sunlight to reflect the values of transparency and fairness in the justice system. The American Institute of Architects recognized the courthouse with its Honor Award for Architecture in 2015, praising the building’s design as “a physical symbol [of] the American system of justice.” The building houses ten different courtrooms located at the corners of the edifice, fourteen judges’ chambers, dozens of offices, and hundreds of federal employees. 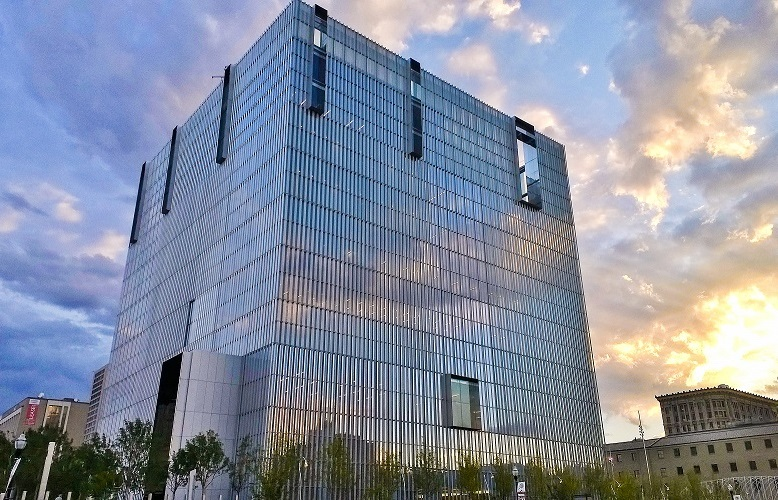 The courthouse is located at 351 South West Temple in Salt Lake City, Utah.