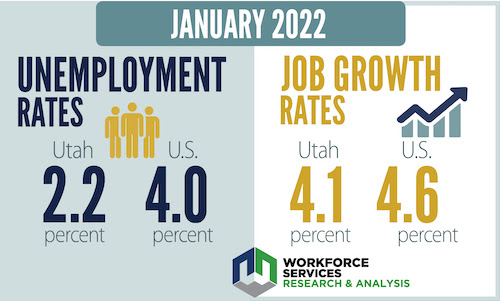 “Utah’s economy entered 2022 on a solid footing and as one of only four states in the nation that have more jobs now than before the pandemic,” reported Mark Knold, Chief Economist at the Department of Workforce Services. “All of Utah’s major industry sectors have returned to or are exceeding their pre-pandemic levels. The lone exception is government, and that is largely traced to the pandemic-induced reductions in higher education employment. The state’s unemployment rates for the latter half of 2021 have been adjusted upward due to regular end-of-year data evaluations and revised 2021 working-age population estimates. Due to this adjustment, January’s 2.2% unemployment rate is Utah’s historically lowest unemployment rate.”

● Additional analysis and tables at https://jobs.utah.gov/wi/update/index.html ● County unemployment rates for January will post on or shortly after March 7, 2022, at https://jobs.utah.gov/wi/update/une/season.pdf ● February’s employment information will be released at 7 a.m. on Monday, March 18, 2022. ● Statistics generated by the U.S. Bureau of Labor Statistics, Washington, D.C., modeled from monthly employer (employment) and household (unemployment) surveys.