The following statistics are presented comparing June 2019 to June 2021.

SALT LAKE CITY — Utah’s nonfarm payroll employment for June 2021 increased an estimated 3.3% across the past 24 months, with the state’s economy both returning and adding a cumulative 51,300 jobs since June 2019. Utah’s current employment level stands at 1,603,500.

“The summer months have brought a firm awakening to the Utah economy,” reported Mark Knold, Chief Economist at the Department of Workforce Services. “The two-year job growth measure increased from 2.3% in May 2021 to 3.3% in June 2021. A full percentage-point increase in essentially one month speaks to the rapid re-emergence of Utah’s economy, despite rumblings of labor shortages. The amount of job growth in the past month implies that, even with labor scarce, a decent amount of new labor has been found.”

* Additional analysis and tables at https://jobs.utah.gov/wi/update/index.html

* County unemployment rates for June will post on or shortly after July 19, 2021, at https://jobs.utah.gov/wi/update/une/season.pdf

The PDF version and charts of this press release can be found by clicking here. 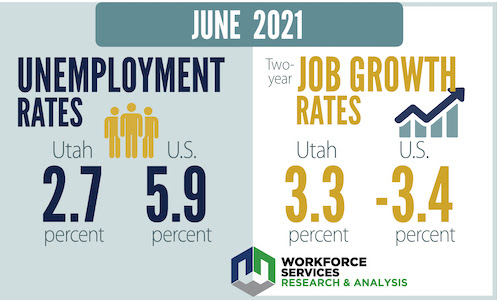